You should know at least these 3 points about rivaroxaban

As a new oral anticoagulant, rivaroxaban has been widely used in the prevention and treatment of venous thromboembolic disease and stroke prevention in non-valvular atrial fibrillation. In order to use rivaroxaban more reasonably, you should know at least these 3 points.I. The difference between rivaroxaban and other oral anticoagulants Currently, the commonly used oral anticoagulants include warfarin, dabigatran, rivaroxaban and so on. Among them, dabigatran and rivaroxaban are called new oral anticoagulants (NOAC). Warfarin, mainly exerts its anticoagulant effect by inhibiting the synthesis of coagulation factors II (prothrombin), VII, IX and X. Warfarin has no effect on the synthesized coagulation factors and therefore has a slow onset of action. Dabigatran, mainly through direct inhibition of thrombin (prothrombin IIa) activity, exerts anticoagulant effect. Rivaroxaban, mainly through inhibiting the activity of coagulation factor Xa, thus reducing the production of thrombin (coagulation factor IIa) to exert anticoagulant effect, does not affect the activity of already produced thrombin, and therefore has little effect on the physiological hemostasis function.2. The clinical indications of rivaroxaban vascular endothelial injury, slow blood flow, blood hypercoagulability and other factors can trigger thrombosis. In some orthopedic patients, the hip or knee replacement surgery is very successful, but they suddenly die when they get out of bed a few days after the surgery. This is likely because the patient developed a deep vein thrombosis after the surgery and died due to pulmonary embolism caused by the dislodged thrombus. Rivaroxaban, has been approved for use in adult patients undergoing hip or knee replacement surgery to prevent venous thrombosis (VTE); and for the treatment of deep vein thrombosis (DVT) in adults to reduce the risk of DVT recurrence and pulmonary embolism (PE) after acute DVT. Atrial fibrillation is a common cardiac arrhythmia with a prevalence of up to 10% in people over 75 years of age. Patients with atrial fibrillation have a tendency for blood to stagnate in the atria and form clots, which can dislodge and lead to strokes. Rivaroxaban, has been approved and recommended for adult patients with non-valvular atrial fibrillation to reduce the risk of stroke and systemic embolism. The efficacy of rivaroxaban is not inferior to that of warfarin, the incidence of intracranial hemorrhage is lower than that of warfarin, and routine monitoring of anticoagulation intensity is not required, etc.3. The anticoagulant effect of rivaroxaban is predictable, with a wide therapeutic window, no accumulation after multiple doses, and few interactions with drugs and food, so routine coagulation monitoring is not necessary. In special cases, such as suspected overdose, serious bleeding events, emergency surgery, occurrence of thromboembolic events or suspected poor compliance, determination of prothrombin time (PT) or determination of anti-factor Xa activity is required. Tips: Rivaroxaban is mainly metabolized by CYP3A4, which is the substrate of transporter protein P-glycoprotein (P-gp). Therefore, rivaroxaban should not be used in combination with itraconazole, voriconazole and posaconazole. 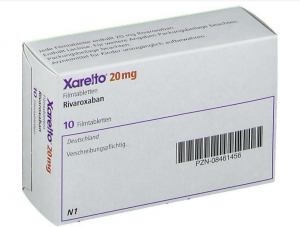